It was the story of Tyler Harvey in the December 29th win over the Texas Legends. Harvey hit nine threes in the last quarter and two overtimes to lead the BayHawks to an improbable victory. What was missed was Alex Davis’ first double-double of the season with 19 points and 13 rebounds. The BayHawks weren’t going to go down without a fight from the rookie. With 8 minutes left in the third and the BayHawks down by 18, Davis flexed and let out a yell after blocking Jamil Wilson’s layup attempt into the first row. And so was born a new Alex Davis. Since then, he is putting up 16 points and 7 boards per game.

19 points & 13 rebounds against the Texas Legends

Much like his first few starts with the BayHawks, Alex Davis’ journey through the basketball world has been up and down. While attending Jack Yates High School in the heart of Houston, Texas, Davis led his team to back-to-back state titles. In his senior season in 2009-10, Davis’ team won the High School National Championship and posted a 36-0 record.

Davis was highly touted with offers from Division I programs such as Arkansas, Houston, and SMU but failed to qualify to play because of academic reasons. “I didn’t qualify but I knew I was still going to play basketball,” Davis says of his time during the recruiting process.

He went to two different prep schools after Yates to improve his academics and keep playing basketball, but both programs folded before he stepped foot on a court again. He eventually stopped playing organized basketball altogether and wound up working at a Walmart near Houston until Hutchinson Community College coach Jay Cyriac came calling.

“I chose to go to Hutchinson Community College because I wanted to play,” Davis goes on to explain. Hutchinson, a two-year school, in Hutchinson, Kansas took Davis away from his home of Houston but afforded him the opportunity to continue playing.  It was a blow to Davis to go from the high ranks of high school ball to Hutchinson but he didn’t let it derail his basketball career.

Davis with the huge putback against the Mad Ants

As a sophomore, Davis led the Blue Dragons to the Region IV championship for the first time in 16 years and a 31-3 record in the NJCAA (National Junior College Athletic Association).  He came out on top in the Region IV tournament, earning tournament MVP.  “Hutchinson made me a better player,” Davis says, “I probably needed it there.”

Rodney Terry, Fresno State head coach, took notice of Davis’ strong play coupled with his newfound academic qualification to play at the NCAA level.  “The coaches showed interest and it was a decision I made (to transfer) because I felt like my style of play would fit with that organization and what they were trying to accomplish at the time,” said Davis.

He started 31 games for the Bulldogs in his first season with the program, posting 11 games with at least 10 points. He showed real growth until he was slowed by injuries and a two game suspension for conduct detrimental to the team in his senior season. Davis used all of his eligibility at the NCAA ranks and declared eligible for the 2015-16 NBA draft.

Davis goes coast to coast for the dunk

He was looked over in the NBA Draft, then again in the NBA D-League Draft. “I tried out for Los Angeles (D-Fenders) and didn’t get anything. So I tried out for Erie,” Davis says with a smile. “It crossed my mind to play internationally. I thought about going to Venezuela.  The coach was showing a lot of interest in me but I’m in Erie now.”

“Suiting up for my first game here was a dream come true. It doesn’t matter the school or all that. It shows you through dedication, you can make it,” Davis says when asked what his favorite basketball moment has been. He finishes talking and heads over to his bag dangling on the bleachers only to change paths and grab a bouncing ball. He’ll spend the next 25 minutes shooting left-handed hook shots in the paint.

His appreciation for Erie is shining on and off the court. Before the December 30th game against the Fort Wayne Mad Ants, Davis ran into two boys at a local Footlocker. Paul Minton, the boys’ father, recalls Davis joking with both of them. “He said, ‘do you like those socks? Do you want a pair of them? And my son looks at me as if to say, ‘Is this ok?'” Davis grabbed a pair of the socks and walked to register with the young boys. “‘Do you like the NBA? I’ll have three tickets waiting for you tonight at the game,'” Minton goes on to quote Davis. Davis paid for the boys socks that they now insist on wearing everyday.

The Minton’s headed for the game later that night, expecting to see Davis on the court but not get a chance to speak with him again. “He’s running off the court, stops, and heads over to my boys to take a picture with them,” surprising the whole family. “He’s an excellent role model for my sons now.” 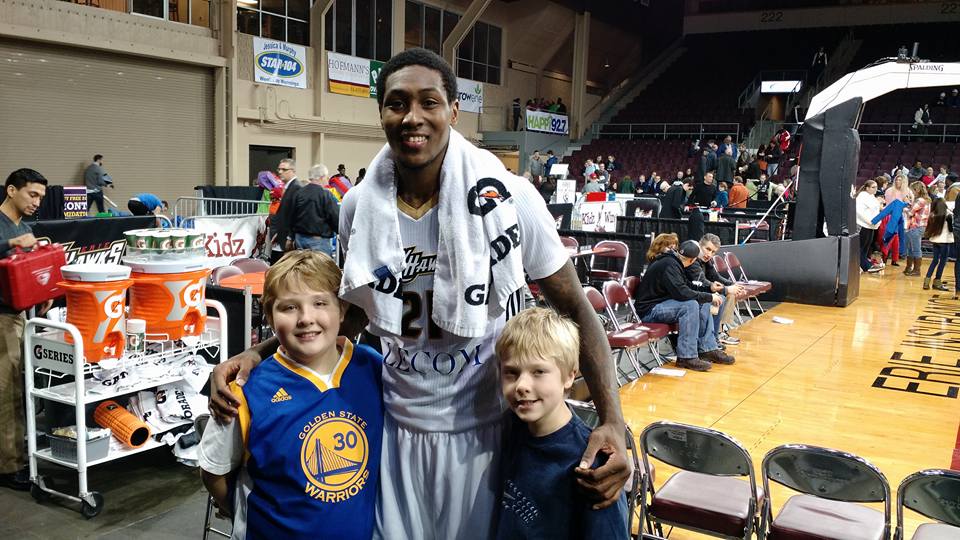 Davis with Samuel and Benjamin Minton

Davis and the BayHawks head into the Development League Showcase this weekend. With numerous NBA scouts and general managers watching, it will be his best chance to make it to the NBA ranks thus far in his roller coaster relationship with the game of basketball.

But that suits Davis just fine and is another challenge he’s willing to accept.