ERIE, PA – The Erie County Technical School, in partnership with the Erie BayHawks, today unveiled a project the school just completed for the Erie BayHawks named the “Flagship Cannon.”  The replica cannon was designed to resemble those that were used on battle ships in Lake Erie, including the Flagship Niagara, and includes a bass drum that will provide the boom of the cannon.  The cannon drum will be used at BayHawks games this season. 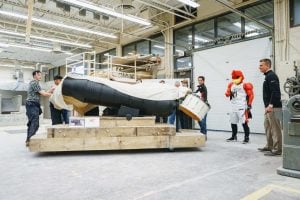 “The Erie County Technical School was extremely excited to work with the Erie BayHawks to create a replica of an Erie battle ship cannon.  The project was an outstanding collaboration of several majors at ECTS including metal fabrication technology, auto body repair, and the construction trades,” said ECTS principal Joe Tarasovitch.

“The work done by the ECTS students and faculty is outstanding and they should be very proud to know their craftsmanship will be on display at every BayHawks game,” said BayHawks team president Matt Bresee. “We’re honored to take possession of it and our fans and players will enjoy hearing the boom of the Flagship Cannon during games.” 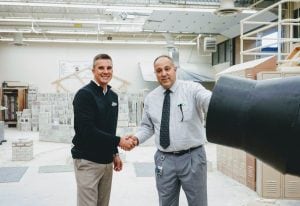 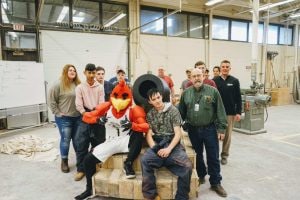 The cannon will be transported to Erie Insurance Arena and will be in action at this Friday’s home opener against the College Park Skyhawks beginning at 7pm.

The Erie BayHawks, presented by LECOM, are the NBA G League affiliate of the New Orleans Pelicans. The NBA G League, founded in 2001, is the NBA’s official minor league whose teams have direct affiliations to NBA franchises.  The BayHawks, established in 2008, play their home games at Erie Insurance Arena and were one of the first teams in the G League to establish a marquee partnership.  The BayHawks marquee partner, the Lake Erie College of Osteopathic Medicine (LECOM), LECOM School of Dental Medicine and LECOM School of Pharmacy offer innovative and affordable education in osteopathic medicine, dentistry and pharmacy. From campuses in Erie, Pennsylvania, Greensburg, Pennsylvania and Bradenton, Florida, LECOM provides student-centered pathways to prepare the next generation of healthcare professionals.  LECOM physicians serve as the BayHawks medical staff, the team practices at the state-of-the-art LECOM Medical Fitness & Wellness Center, and together the BayHawks and LECOM promote education, health and wellness throughout Erie County.