ERIE, PA – The Erie BayHawks, NBA G League affiliate of the New Orleans Pelicans, announced today that the team will return as the “Erie Pepperoni Balls” for their home game on February 1 against the Delaware Blue Coats. The promotion ties back to the team’s initial unveiling during the 2017-18 season, in Erie’s first-ever “What Could’ve Been Night.”

New for this season is a bobblehead giveaway to first 1,000 fans that depicts the team’s pepperoni ball character, sponsored by Rebich Investments. 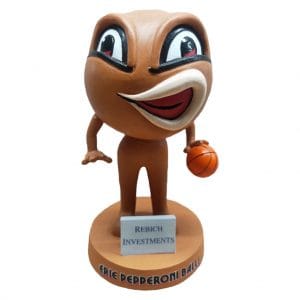 The team will wear red uniforms for the game adorned with the delicious Pepperoni Balls logo. The logo features an animated pepperoni ball with eyes, arms, legs and a tongue made of pepperoni, holding a basketball in his left hand.  “Pepperoni Balls” is written across the chest in bold white and red font with players’ numbers to match. The Pepperoni Ball character is set behind the letters and numbers, while the United Way’s Imagination Library logo appears on the back of the jersey beneath the player’s name. The uniforms will be auctioned during the February 1 game, with proceeds benefiting the United Way of Erie County’s Imagination Library. 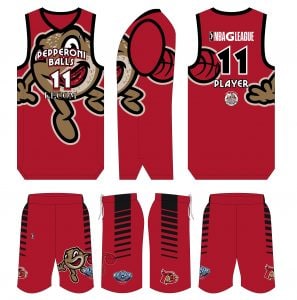 Fans can visit EriePepperoniBalls.com to learn more about the Erie Pepperoni Balls and purchase Pepperoni Balls t-shirts.  Fans can also join the conversation and share their love of pepperoni balls on social media by using the hashtag, #GoBiteWin.

The Erie BayHawks, presented by LECOM, are the NBA G League affiliate of the New Orleans Pelicans. The NBA G League, founded in 2001, is the NBA’s official minor league whose teams have direct affiliations to NBA franchises.  The BayHawks, established in 2008, play their home games at Erie Insurance Arena and were one of the first teams in the G League to establish a marquee partnership.  The BayHawks marquee partner, the Lake Erie College of Osteopathic Medicine (LECOM), LECOM School of Dental Medicine and LECOM School of Pharmacy offer innovative and affordable education in osteopathic medicine, dentistry and pharmacy. From campuses in Erie, Pennsylvania, Greensburg, Pennsylvania and Bradenton, Florida, LECOM provides student-centered pathways to prepare the next generation of healthcare professionals.  LECOM physicians serve as the BayHawks medical staff, the team practices at the state-of-the-art LECOM Medical Fitness & Wellness Center, and together the BayHawks and LECOM promote education, health and wellness throughout Erie County.